The United States is historically a nation made up of immigrant families, and not much about that has changed in recent years. People come from all over the world in order to live in the United States.

Read on to learn more about United States immigration data and statistics.

Where Do Immigrants Come From?

According to the National Conference of State Legislatures, during the year 2017, there were a total of 278.8 million native-born United States citizens, 20.7 million naturalized citizens, 13.1 million legal noncitizens, 11.3 million unauthorized immigrants, and 1.7 million immigrants with temporary visas. The total U.S. population in 2017 was 322 million people.

People travel far and wide from every corner of the planet in order to seek refuge in the United States. 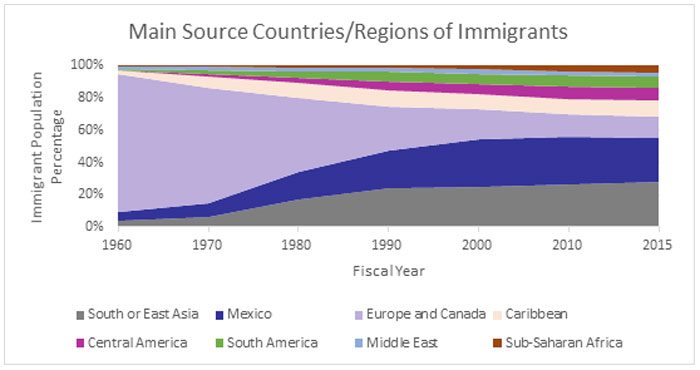 In addition, the United States has seen a dramatic spike in the number of immigrants that come from the following regions:

Who Gets Citizenship and How Long Does it Take?

If you’ve ever dealt with immigration law, you know that becoming a citizen of the United States is not always an easy or speedy task.

There are different ways immigrants can obtain citizenship in the United States. The following list provides the various methods immigrants may use in order to attain naturalization, as well as the number of people in each category that were granted lawful permanent resident status in 2017: 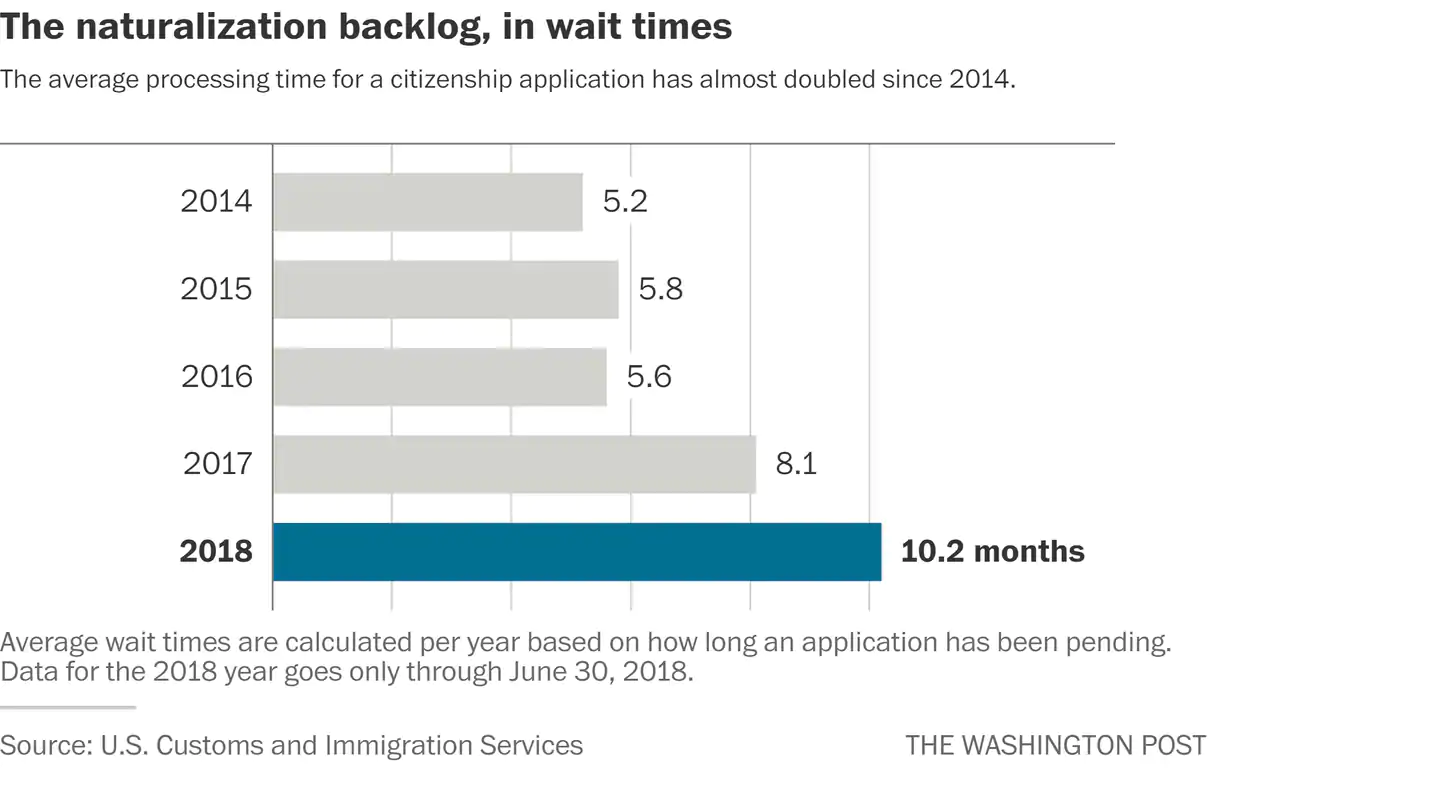 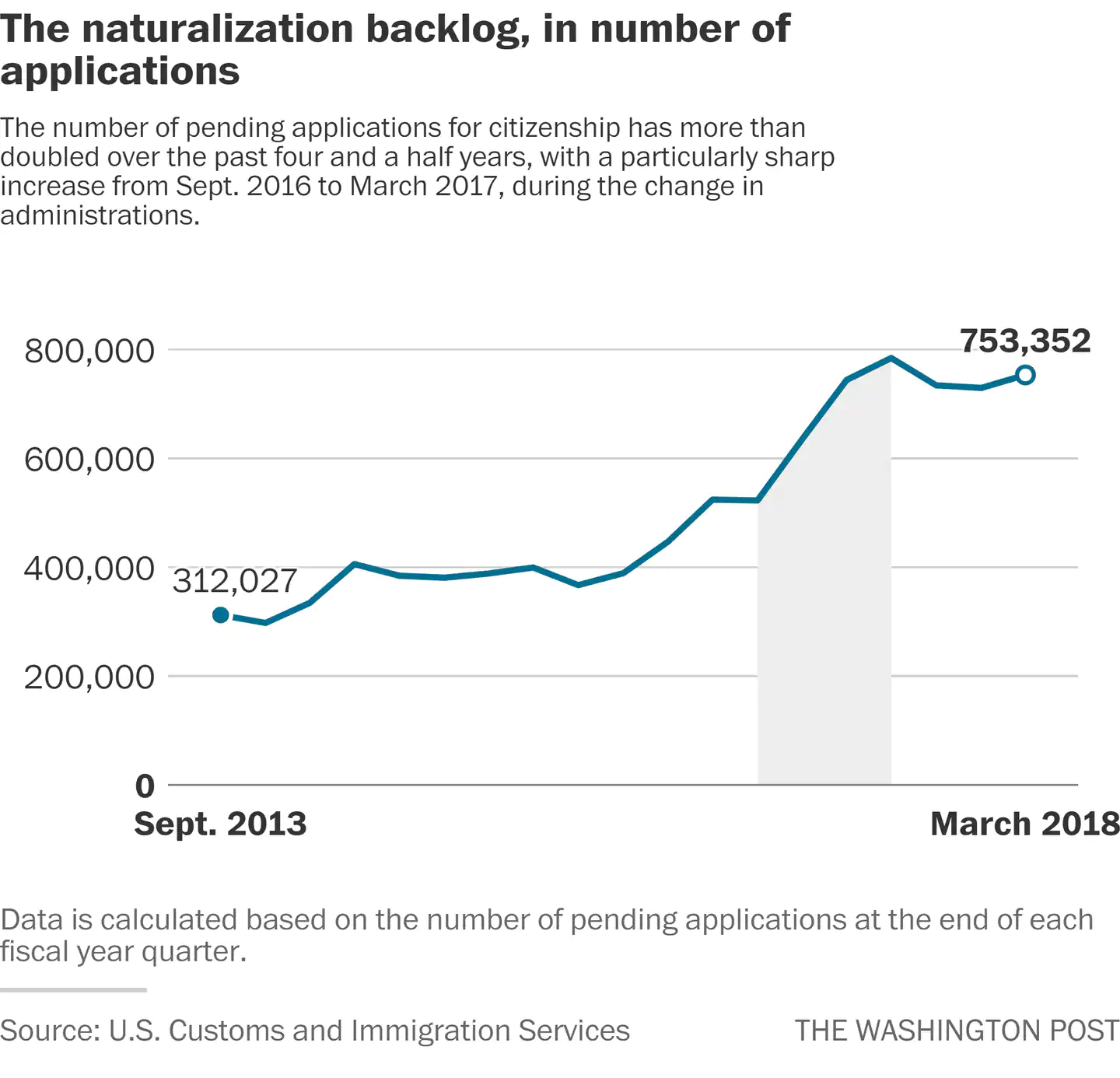 Furthermore, the immigration application backlog rate is even higher in immigrant-rich regions, like Washington, D.C., and Maryland, where people are likely to wait 16 months or longer.

Part of the reason for these backlogs and longer wait times is that harsher guidelines have been instituted since 2014 for immigrants who’d like to obtain citizenship. The United States Citizenship and Immigration Services (USCIS) office extended the citizenship application document from 10 to 21 pages in 2014.

Among other additional information, the USCIS office would now like to know if immigrants have ever been involved in insurgent groups or if they’ve ever been tied up with (or a target of) genocide.

The additional questions create longer wait times since every question on the written application is also asked by a USCIS officer in person at the time of the citizenship interview. These verbal interviews used to last about 30 minutes. Now, they usually take twice as long.

Similarly, the USCIS office is now explicitly rejecting applications that are missing items, instead of notifying the applicant of their mistakes so they may correct them.

A total of 699,350 immigrants were granted deferred status under the Deferred Action for Childhood Arrivals Program (DACA) as of August 2018. That same year, 54% of the people who were eligible for DACA applied to the program. Similarly, no less than 317,000 immigrants have obtained deferred status out of Temporary Protected Status.

If you are an immigrant who seeks citizenship, a Green Card, any kind of visa, or anything else concerning immigration in the United States, we may be able to help. The attorneys at Maney | Gordon | Zeller are highly skilled in immigration law and have helped people just like you with their citizenship goals. Don’t hesitate to contact our office right away about your case.